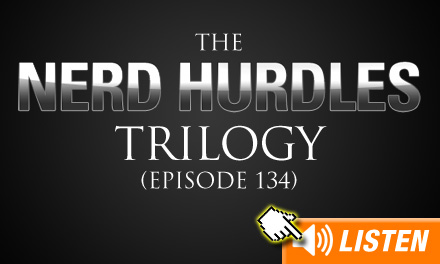 Like all good things that come in threes, Nerd Hurdles celebrates its 3rd birthday today! Three cheers—or these days, woots—for us!

Just like people you pick-up in bars, or in line at a sci-fi convention, somewhere along the line they inevitably let you down. Most often the brilliant first installment is a cash cow that studios want to milk to death. That’s understandable. If we could spin Nerd Hurdles into three progressively crappy, but profitable, podcasts, you can bet your ticket stubs we sure as hell would.

Pirates of the Caribbean, The Lost Boys, Robocop, Raiders of the Lost Ark, Jurassic Park, Star Wars and The Terminator are all fantastic stand-alone films. They all tell complete stories that need no further elaboration and, by the very nature of their endings being so neatly tied up in bows, guarantee only diminishing returns with each dip in the well.

The worst, and most obvious, offender is probably The Matrix. Parts 2 and 3 are so obviously pulled out of asses that cinemas are still spraying Nilodor on seats trying to get the shit smell out.

Then you have proper trilogies. Stories that were conceived from the start as having three chapters. X-Men and Spiderman both started off on the right track but the ball was unexpectedly dropped—off a cliff, with lead weights attached  into a sea of lava— in the third act.

Vampires vs. werewolves underdog, Underworld, didn’t even manage to get a proper third act as first installment’s poor box-office performance meant acts II and III were amalgamated into the already in-production second film. Ironically, the strength of the franchise’s cult-following got a pointless prequel greenlit.

Ultimately, the most successful “trilogies” are often open-ended film series that happened to have only three installments produced. The celebrated Man With No Name trilogy isn’t really a trilogy at all as it’s really three separate stories which happen to involve Clint Eastwood’s iconic character. A man who who doesn’t even have a name so could actually be argued to be three separate characters. If you’re the kind of guy who’d get drunk at a party and argue that. (Why are you looking at me?)

One of my favourite trilogies,Toy Story, arguably gets better with each film. But each could quite happily exist without the other two. The relatively consistent Mission: Impossible movies (up to four installments now) are really no more than stand alone episodes in the tradition of James Bond films. Only the ham-fisted call-back to Alan Rickman‘s “Hans Gruber” character makes Die Hard III a legitimate part three (and yes, there’s a part four in that franchise too).

So what are the perfect trilogies. Is there one that tells a three-part story and doesn’t stumble in the final lap.

Most film buffs would cite The Godfather but we couldn’t watch past the first film. We’re willing to grant the other two are equally as crappy. Or brilliant, whatever.

Lord of the Rings could be a contender though it’s not so much three films as a single three-part film—there is a difference.

Highlander is balls from the get-go. Even ignoring the ignominious 4th film, Indiana Jones is at least 50% terrible. Same goes for other classic four-part trilogies The Terminator, Scream and Alien. And don’t forget a six-part debacle of a trilogy called Star Wars. Fairing no better are popular favourites Back To The Future and the not-even-a-trilogy Ghost Busters.

Throw in Blade, Cruel Intentions, Darkman, Rush Hour, Crocodile Dundee and low-blows like BloodRayne or Cyborg Cop and I think we can just agree that bad things come in threes.

The image below has nothing to do with anything but being awesome. Actual, crazy, IRL search terms that got people to this blog in November 2011 to follow…

wesley crusher ball gag: I don’t think this is a sex thing. Just a “Shut up, Wesley” thing.

star trek wesley crusher dies: I found no evidence of this. But I did find this disturbing tidbit: “Wesley has a birthmark in the buttocks or groin area and is allergic to metorapan treatments.” (source)