In Defense of Turtle Nostrils 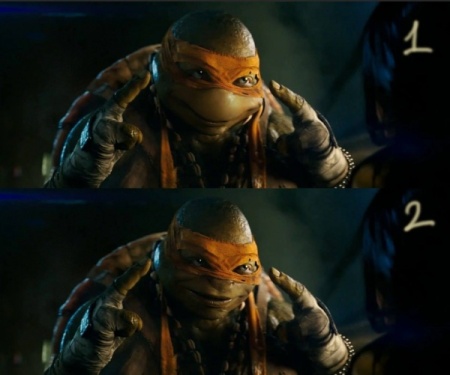 This thing (reported by Bad Ass Digest) where a fan fixed the creepy snouts from Michael Bay‘s new Teenage Mutant Ninja Turtles film has been making the rounds. Not having seen the trailer, I was in agreement. Yeah, those nostrils sure create a horrible uncanny valley feeling and the fan sure improved these Turtles. But then I watched the trailer.

And, you know, I think Bay’s redesign—so long as you’re not looking at a still photo—actually works really well. If for no other reason than in the previous live-action films the faithful-to-the-source material facial designs never really worked. In the comic and cartoon those absurdly wide mouths and not having nostrils was fine. It was a comic, it was a cartoon, suspension of disbelief was easy. Sure, they had to breathe through their mouths like, well, I guess like teenage boys, but they looked cute and goofy and fitting for a cartoon. This new take on their appearance makes them strangely more relatable. They’re hideous mutants, more-so than before, but in a kind of cutesy, charming Quazimodo way. And I can kind of believe in them.

Now, if we want to talk about potential problems revealed in the trailer (which at first viewing looked surprisingly decent) I think we can find a few things.

So far the only thing I can see that looks legitimately good about this film is the kind of creepy Turtle redesign.

This entry was posted on Wednesday, April 2nd, 2014 at 10:37 am and is filed under Nerdly Analysis. You can follow any responses to this entry through the RSS 2.0 feed. You can leave a response, or trackback from your own site.

2 Responses to In Defense of Turtle Nostrils