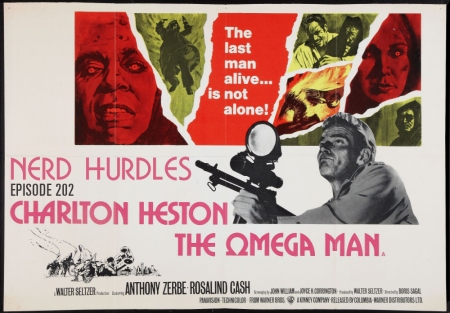 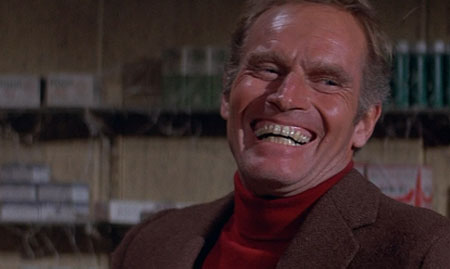 Charlton is really happy about the deals on web domains and hosting you can get from our sponsor, GoDaddy. Special totally not pervy code for Nerd Hurdles listeners: nerd69 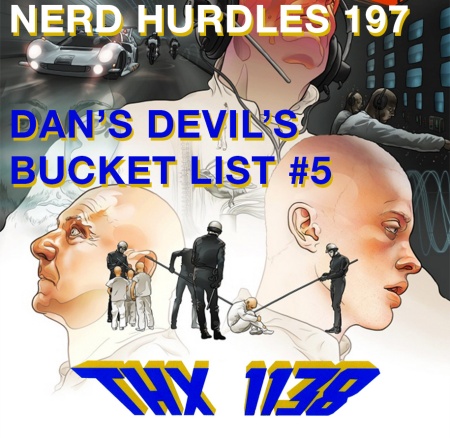 The fifth installment in our DAN’S DEVIL’S BUCKET LIST series in which we watch classic movies of dubious quality that Dan has never seen. In this case, the seminal sci-fi, dystopian thriller love story: Geroge Lucas’s ‘THX 1138′ — the film that lead to ‘Episode 1′ being a thing that exists. At least that’s one way of thinking about it. It’s also directly responsible for this thing.

Another movie crossed off Dan’s Devil’s Bucket List* — the seminal 1982 action flick, starring Sylvester Stallone as John Rambo, First Blood, a film many may still have the wrong idea about.

Like many who cut their Sylvester Stallone teeth on the schlocky Rocky III and IV as a child, I had my mind effin’ blown when I saw the original Rocky for the first time as a young adult. The realization that Stallone is a hell of an actor (WTF?!) and a hell of a filmmaker (double-plus WTF?!) was world-shaking to say the least. Similarly, if you only know Stallone from his post-Rambo: First Blood Part II 80’s and 90’s action bonanza heyday,  First Blood will spin you on your head. It’s a subtly written, deftly acted and well-directed film as much about the frailty of human beings as it is about a man with a big-ass gun.

To be honest, Stallone has phoned-in his performances throughout most of his career. Lords of Flatbush, Rocky, Rocky II and First Blood not with-standing, criticism of his abilities as an actor have been well-deserved. Stallone is a hard nut to crack. Unlike Clint Eastwood who defied his reputation with Unforgiven, rebranded himself as an Oscar-worthy actor and director and never looked back, Stallone seems content to sign on to any old action vehicle that’s placed in front of him. Occasionally he’ll raise his head above water in a film like Copland, but for every Copland there’s literally three (possibly 4 now) The Expendables.

It’s almost hard to reconcile the heart behind Rocky would even want to watch something like The Expendables series, much less be the steamroller behind it.

From a distance, the journey from First Blood to Rambo III to Cobra to The Expendables is less baffling. But that is assuming you’ve already accepted the bizarro-world sequel that is the James Cameron co-penned Rambo: First Blood Part Two. 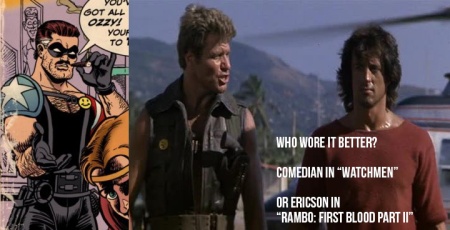 I mean, John Rambo actually teams up with Comedian from Watchmen. That’s about the least bat-shit crazy aspect of the film. The only explanation I can come up with is similar to the theory that most of Indiana Jones and the Crystal Skull is a radiation-induced hallucination while Indy is slowly dying inside that refrigerator.

The film opens three years after the events in the first film and according to Principal Skinner, he has five more years to serve in his maximum security prison for the crimes committed in First Blood.

Wait. Five years? He got a total of only eight years for killing two cops, maiming several others and doing hundreds of thousands of dollars in damage to the town? What?! I want that judge if I’m ever in trouble with the law. Things get less believable from that point on. The only way any of it’s happening is if it’s a PTSD-driven psychological break Rambo’s suffering while serving life in solitary confinement.

* Dan’s Devil’s Bucket List:  Regular guest host Dan has a “bucket list” of movies he needs to see. To be on the list, the film must be a genre classic (or an influential cult movie) that is considered by many to be “essential viewing” but is popularly considered to be of dubious quality (that last being the reason he’s put off seeing them). 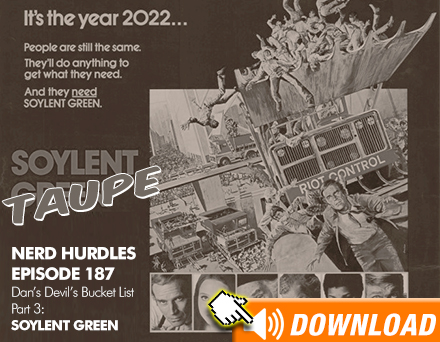 We return to Dan’s Devil’s Bucket List of classic—or at least infamously terrible— sci-fi movies that everyone always references, but he’s never seen. So he makes us sit through them with him. In this third installment, we ingest the 1973 dystopian classic, SOYLENT GREEN. 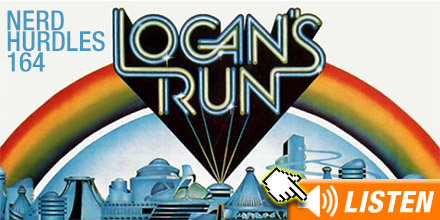 Dan Depeuter’s back to dip into THE DEVIL’S BUCKET LIST of classic nerd culture films at least one of us has miraculously never seen. This week we take a run at one of Jakob’s childhood favourites, the 1976 sci-fi spectacular: Logan’s Run.

1976 was an amazing year for special effects.

In other news, Mandi doesn’t believe “Ever been to sea, Billy?” originated with this commercial.

Perhaps the definitive example of a nerd hurdle is one of those old Sci-Fi classics you know you should see but it just looks so crappy you avoid it for years. Such as the original 1968 version of Planet of the Apes, a movie so many have seen, heard and spoken evil about that you’ve avoided it. That is, until your friend Dan DePeuter (of the oft-mentioned DePeuter School of Overacting) comes to town and demands you see, hear and speak about it.