We made a survey about Star Trek. A whopping 47 people responded (including us)! These results are totally scientific and reveal the ultimate truth about who the best and worst characters are and what series is the true fan favourite. You can’t argue with the opinions of a whole 47 people.

Listen via Soundcloud (above) or the fancy “enhanced” video version on our YouTube channel (below) which features illustrative and illuminating  image pop-ups a-plenty.

See below for data! Small-d data, not Data. There really should’ve been an episode where the Enterprise was almost destroyed because someone misunderstood which data/Data was being referred to.

END_OF_DOCUMENT_TOKEN_TO_BE_REPLACED

Jakob and Mandi discuss the end of all things Gilmore Girls… or is it? Are we going to be subjected to another glimpse of Stars Hollow life in ten years’ time? And so on and so on, forever and ever, the same as Stars Wars and Trek? And what is the cultural relevance of having seen A Year In The Life or not having seen Rogue One. Plus, 2016 takes another life.

A couple quick notes of things I meant to bring-up on the episode but forgot:

Why is it that Gilmore Girls can’t  portray any career accurately? I can only speak from experience of working at a university newspaper and being a musician, but from that I can extrapolate that they way they depict running an inn, diner or kitchen is a weird TV fantasy version as well. One thing I appreciated in A Year In The Life  was that, ten years later, Zack and Lane are still in Stars Hollow playing what they would’ve previously considered sell-out jazz in an alley. Much more realistic than hipsters booing Zack’s on-stage melt-down that breaks up Hep Alien. For a show that claims to love and honour music, the writers sure seem to have never been to an indie show before.

I was really hoping they’d address, or acknowledge, Lorelei’s mental health issues in A Year In The Life and, for a hot moment, it looked like it was finally going to happen when Emily tricks her into attending therapy with her. But the moment passes and Lorelei is left to carry on blissfully unaware of her narcissistic personality disorder, or whatever it is the jumble of anti-social traits the writers have given over the years add up to. Emily does call her out for steamrolling through peoples’ lives but Emily’s opinions of Lorelei have long been positioned to be either ignored or viewed in reverse. And while I can understand why the producers don’t want to diagnose their lead manic pixie dream girl as mentally ill, but if she isn’t then… she’s just a living nightmare and every act of inter-personal destruction she’s committed over the course of 7.5 seasons is, at best, normalized and, at worst, romanticized as a quirky ideal.

This week we talk about a couple DC television shows, the fabulous Gotham and the pretty good Supergirl. But not The Flash or Green Arrow because we’re not super dedicated nerds and just watch whatever superhero shows Netflix throws in our laps. As some listeners have noted, we’re not even aware of the bronze, silver and gold eras of Batman. We can only assume the only true Batman, Adam West, is in the Platinum era.

Mandi and Jakob had a baby. It’s been… an experience. From the terror and trauma of childbirth to the trials, tribulations and total hell that is breast feeding, it’s been a month-long journey on a hard road paved with scabs and slick with numerous bodily fluids. Parenthood is, apparently, a complete horror show.

On the plus side, they’ve watched a lot of the underrated Star Trek: Enterprise.

END_OF_DOCUMENT_TOKEN_TO_BE_REPLACED 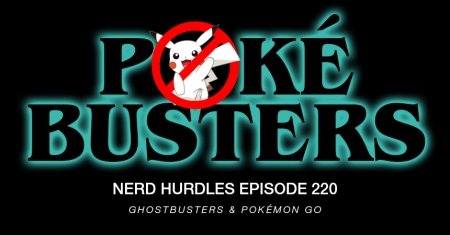 Two pretty darn good things that haters are hating on. Resident haters Jakob and Mandi give Pokémon Go and the Ghostbusters 2016 reboot some love. Both well-made, charming additions to their franchises, what’s not to like?

Well, not mentioned in the episode but I (Jakob) find the whole premise of the Pokémon universe a little horrifying. It makes the capture and enslavement of small creatures seem like a light-hearted game. Especially when these cute little companions are not kept in humane habitats but in some kind of tiny stasis orbs. I mean, these cutely-named “pocket monsters” are kidnapped, imprisoned and then forced to fight in gladiatorial combat. Taken from their perspective, it’s essentially The Maze Runner or Battle Royale. There’s something seriously effed-up about the whole thing. Anyway… we don’t talk about that. Mostly about how people who hate on Pokémon Go are kinda dicks.

Actually, in this episode we mostly talk about neither Ghostbusters nor Pokémom Go.

We liked Stranger Things so much we immediately did an episode on it highlighting some of its weaker points. That’s the normal thing to do, right?

Mostly we try to navigate the myriad of references to classic 80s sci-fi and horror movies (not tropes but actual scenes lifted from movies) in the show and decide if too much of a good thing is too much of a good thing. Watching an episode (or 4 in row) can be like falling into a sugar coma of nostalgia. Stranger Things is such a pastiche, it causes one to wonder if there’s substance beneath the style. Perhaps not. But, ultimately, that might not matter in the same way Eggo waffles are a pale imitation of actual food yet are delicious and satisfying.

Regardless, it can be agreed there needs to be a social media campaign to bring back fan-favourite character Barb Holland. #BringBackBarb #BARBLIVES

In typical “nuanced” Nerd Hurdles fashion Jakob comes off somewhat negative about the Stranger Things theme music (by S  U R V I V E) which is very similar, if not pretty much identical, to an album he recently released called Mind Thief. a snippet of which is heard at the end of the episode or can be streamed in full below. Jakob claims his poo-pooing of the John Carpenter-esque synth music in Stranger Things had nothing to do with grapes, sour, or otherwise.

Having run out of quality shows to watch on (Canadian) Netflix, we get Scandalous with Shonda Rhimes frustratingly good/bad brand of addicting spray-cheese television.

Jakob and Mandi take a trip to the tunnels underneath the former Lakeshore Psychiatric Hospital (http://www.asylumbythelake.com)—aka Mimico Insane Asylum, aka Mimico Hospital for the Insane, aka The Police Academy, aka Humber College—during Doors Open Toronto.  They also talk about Poirot: Murder on the Orient Express, Midsomer Murders, London Spy and M:I Rogue Nation.

Mandi’s pictures from the tunnel tour:

Jakob and Mandi talk about a totally random assortment of things they’ve been watching on Netflix. Mainly Daredevil Season 2, Downton Abbey Season 5, House of Cards Season 4 (well, the first 3 episodes), most of Poirot, and the Ender’s Game movie.