We made a survey about Star Trek. A whopping 47 people responded (including us)! These results are totally scientific and reveal the ultimate truth about who the best and worst characters are and what series is the true fan favourite. You can’t argue with the opinions of a whole 47 people.

Listen via Soundcloud (above) or the fancy “enhanced” video version on our YouTube channel (below) which features illustrative and illuminating  image pop-ups a-plenty.

See below for data! Small-d data, not Data. There really should’ve been an episode where the Enterprise was almost destroyed because someone misunderstood which data/Data was being referred to.

END_OF_DOCUMENT_TOKEN_TO_BE_REPLACED

In this episode Jakob and Mandi chat about the marvelous marvels of the Marvel universe. Well, Luke Cage and Deadpool at least. They also discuss Star Trek: Enterprise Season 3 and Bones Season 11. 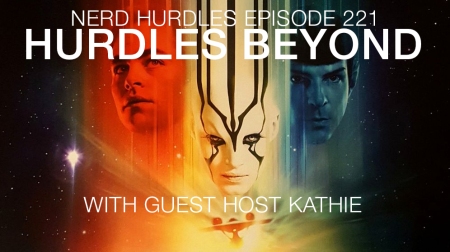 END_OF_DOCUMENT_TOKEN_TO_BE_REPLACED

Before heading back to Africa, Kathie wanted to slam the new E.L. James book, Grey. Mandi wanted an update on her Tinder adventures and tangents ensued. So much so neither topic gets talked about much — Grey pretty much not at all. We do however critique the so-called “best selfie ever” (see above). Heck, even the title of the episode is a reference to a post-credits easter egg at the end of the episode. Have fun. We did.

Note: Listeners may be confused by references to Mandi’s brother Jake as well as Jakob being called “Jake” in a game where Mandi and Kathie role-play his parents as that’s what his parents call him. Two different people.

A double review of William Shatner’s documentary, The Captains, which is a tribute to his own vanity, as well as the latest Marvel Comics movie, Captain America: The Winter Soldier, which is barely about the titular soldier. 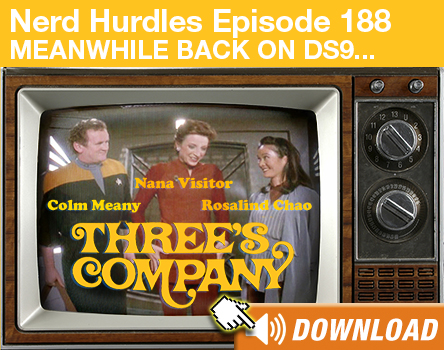 It’s been a while since we’ve talked about our stay on Deep Space Nine. Frankly, we didn’t have much to say. It was okay, but everything else we’d recently watched seemed more interesting to talk about. More interesting, that is, until we were slapped in the face with Season 5.

On the episode, we reference GraphTV, a site that graphically tracks the IMDB ratings of any TV series. Mandi claimed it proves Voyager is the better series. Though the numbers do bear this out, it’s not so clear cut once you begin to dig into the data.

What we see from the data is that DS9 has higher peaks and valleys than Voyager. While it boasts 7 more episodes which rated 8.5 or better, Voyager has fewer in the negative range (6.5 or less), and only 2 in the terrible episode range (<6) compared to DS9’s whopping 5. Voyager also does better within the mean range (7.0-8.49) by a count of 8 episodes, which indicates a greater consistency over the course of the series.

For my money, middle-ground consistency is is more important than exemplary episodes coupled with a greater number of teeth-gnashingly substandard ones.

It is also a matter of objective taste. Many of the highly ranked DS9 episodes, I simply do not care for. Of the three highest rated episodes (8.9) “The Visitor” is the single DS9 episode I’ve felt ranks along side the best of the Trek franchise. “Duet” was oh-kay, but ultimately forgettable (I know it has something to do with Cardassians). Remove the digital gimmickry and fan-pandering in-jokes from the third, “Trials and Tribble-ations“, and what you have it’s a pretty substandard episode. Set it as a typical away mission on a contemporary space station and I’m sure we’d find it in the <6.5 category. Of course, the whole point was Forrest Gumping TOS for ratings so… mission accomplished?

I’d also put forward that as bad as Voyager‘s lowest rated episode, “Threshold” (aka “Salamander Lovin’“) is a far more watchable episode than DS9’s abysmal “…Nor the Battle to the Strong” which, despite unfathomably being granted a 7.4 (this says a lot about DS9 fans), is hands-down the worst single episode of Trek I’ve ever witnessed.

Not captured in the data is the small question of acting ability. Though Robert Duncan McNeill, Robert Beltran and Garrett Wang consistently phoned in uninspiring performances, they never made me feel sorry them as actors or human beings. The performances of Alexander Siddig, Nana Visitor, Rosalind Choa, Cirroc Lofton and, most often, Avery Brooks consistently cause me to cringe from head to toe. Watching any episode that’s heavy on one of their characters is an endurance test where I see how long I can hover my finger over the “pause” button before I plunge it down and run from the room.

Statistics can be twisted to benefit whichever side of an argument suits you, but in our books the advantage goes to Voyager.

Other links referenced in the episode:

Racism in Game of Thrones: http://artthreat.net/2013/06/game-of-thrones-and-racist-fantasy/

What is your Geek Rating: http://www.buzzfeed.com/awesomer/what-level-geek-are-you

We got Nerd Hurdles, which podcast are you? Dan drops by to do some of those novelty personality tests you see on Facebook. If you’d like to play along, go to Zimbio’s quizzes page.

We decided to stay on the J.J. Abrams train for another episode to cover his 2011 Spielberg homage, Super 8. Surprisingly, it’s not a derailed disaster like the train the film—but does it live up to the source material?

ALSO IN THIS EPISODE: We talk about Deep Space Nine in the first of our promised installments on the popular TNG spin-off.

Which may or may not be fair. I was also under the impression general consensus was the film completely fall apart by the second act. But I thought Super 8 was actually pretty fantastic. I mean, given that there is less than a single original idea in the whole film.

It far surpasses homage to being a direct mash-up of producer Spielberg’s E.T., The Goonies and Close Encounters and Abrams’ own Cloverfield. If you wanted to be generous, you could use another French word, bricolage, to describe the creative process here. Basically the exact same approach that hampered Star Trek Into Darkness (not so much an homage to Wrath of Khan but a wholesale pillaging and re-purposing).

In Super 8 though, the approach works really well. Perhaps more so than any other film or TV endeavor Abrams has managed to tell a solid story with three-dimensional characters who act in a psychologically believable way, with a minimum of WTF plot points and continuity flaws (Why, oh why, did the truck carrying the white cubes come back into town?).

Perhaps Spielberg (not credited as a writer, though basically he should have been since he wrote pretty much all the source material) helped him out a lot more than was let on. I can’t remember what the criticisms leveled at the film were exactly, but I can’t help feel they must have been fueled by a post-Lost Abrams backlash. I can fully appreciate that, like I said, this is why I avoided it myself (Mandi avoided it because she thought it’d be all hand-held shaky-cam like in Cloverfield). A part of me even wanted to downright hate the film with a white-hot intensity.

But the negativity makes no sense if you watch the film objectively. Without the baggage Abrams’ name (and Spielberg’s for that matter) carries, the film is a solid coming-of-age-boy-and-his-alien-friends-sticking-together-flick (The most convoluted movie sub-genre ever?).

I’m willing to surrender to the inevitable complete lack of originality in the films of the upcoming decade (and beyond) if they’re made this well.

This week the nerds hurdle into darkness (see what we did there?) and as a result Kathie snarks on Captain Kirk while Mandi has a Zack attack and Jakob is dumbfounded neither of them had seen Wrath of Khan before.

A few interesting Into Darkness reads and links regarding the more sexist aspects of the film:

FELICIA DAY, asks “Where are the women?  The strong women?  The women we’d like to see in 200 years?”

SLASHFILM says, “The whole thing is over within a minute, and ends with Carol still in her bra and panties. Her lingerie isn’t even all that sexy. But — and memorize these next two words, because they’re basically my entire thesis statement — context matters.”

THE DAILY DOT says, “Are we expected to believe that a mysterious plague has wiped out 75% of the women in the galaxy?”

Also, Benedict Cumberbatch looks even more like an OTTER with water streaming down his face.

It’s quite easy to understand why a lot of people don’t like Star Trek. Even at its best it’s kind of cheesy. There’s spaceships, robots, green-painted women and a noticeable lack of contractions in speech. But part of the reason so many people dislike it is simply the law of averages—absolutely everyone has seen it.

Everyone, that is, except Victoria (aka Bella Fox).

Well, her and a few other people. But she’s the only one we know who’s actively into a plethora of really nerdy things and yet hadn’t sought it out.  Impressively, she managed to avoid it during  its near 24/7 syndication reign in the late 1990s and early 2000s. A near impossible feat regardless of whether you wanted to watch the show or not.

So, feeling her nerd cred was suffering, she asked us to help her (and Måthìaş who had seen a little Star Trek 15 years ago) boldly go where so many people have gone before…

Episodes watched: “The Pegasus” and “Homeward” from season 7 of The Next Generation.